Chicago, Illinois (August 10th) - Developers have opened new space for lease in the downtown area by repurposing previously used retail space and making the penthouse, once used for the building’s mechanical needs, available for more than just ductwork. By using Thermaduct’s Outdoor Duct System and placing the boiler room and ductwork on the roof, another 130,000 square feet of floor space became available for rent. For building owners wanting to maximize the use of interior square footage, Thermaduct makes an outdoor mechanical room a cost-saving alternative.

The historic Marshall Field’s Building on State Street is a central location for companies seeking space in the heart of downtown Chicago, as six floors will be open for lease. In the early stages of planning the top floor was to house the mechanical supply and return ductwork for the entire building, shielding it from rain and snow. Chicago’s own Atomatic Mechanical Services along with Thermaduct fabricator, Sheet Metal Werks, presented an outdoor solution to free up more space to house additional tenants. By moving the nearly 14,000 square foot of duct onto the roof of the Marshall Field’s Building, there would still be plenty of rooftop space available for tenants to have access to a rooftop deck for enjoyment.

In addition to having more space to rent, using Thermaduct offered reduced weights when compared to traditional galvanized metal with liner. Duct sections were lifted in 16 foot sections weighing 1600 pounds each. This allowed for easy movement across the roof deck to align them into place.

“With Thermaduct we were able to take out about 3000 pounds per lift compared to galvanized ductwork with a 3 inch liner. When everything was up on the building it made a huge difference to the overall roof load.” - Kevin Ryan, President of Sheet Metal Werks. 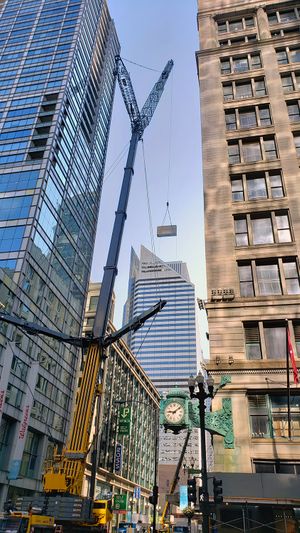 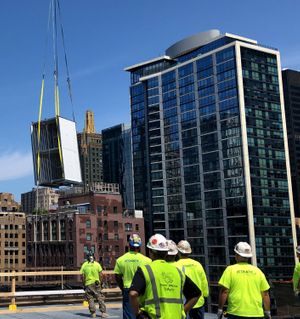 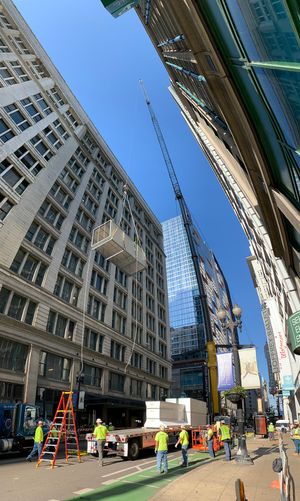 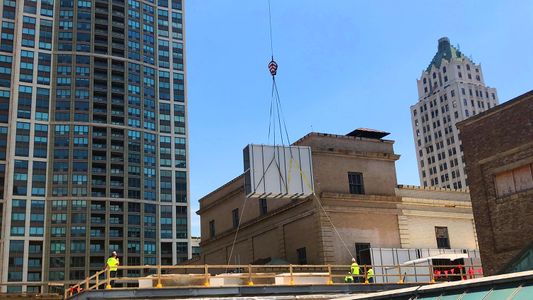 By working closely with Sheet Metal Werks for a solution, Atomatic’s lift on August 10, 2019 was a smooth process for both companies.

Using Thermaduct was an easy choice for Steve Stachorek, President of Atomatic Mechanical Services, because of their past experience installing the pre-insulated system.

“I’ve witnessed too many projects in my career where the customer had to replace exterior insulation because of a failure in its vapor barrier. After using Thermaduct on several of our projects, I am totally convinced that it is the right solution to preserve the longevity of any exterior duct requiring insulation.” - Steve Stachorek, Atomatic Mechanical Services

For developers and building owners considering moving their mechanical systems back outdoors, Thermaduct’s rectangular system will provide a complete solution with the duct, insulation and cladding in one product. The strong, 1000 micron vinyl shell has an uncompromising surface, with up to 3 corners thermally bent with no seam and the final corner cohesively bonded with a solvent weld. A waterproof option, Thermaduct’s high insulated values, low thermal transfer and extremely low air leakage rate provide unmatched air distribution efficiency backed by a 10 year limited warranty.

As energy codes push the required insulation values higher and higher, the need for better outdoor duct solutions is growing. Thermaduct products are designed to meet the needs of outdoor applications with a high level of energy and installation efficiency.

Find out more about our outdoor solutions.

Low air leakage, IAQ duct solutions increase the energy efficiency and health of your building. Thermaduct is here to help. Our indoor products are lightweight solutions that reduce installation weight by over 70%.

Find out more about our indoor solutions.