What is Outdoor Duct? 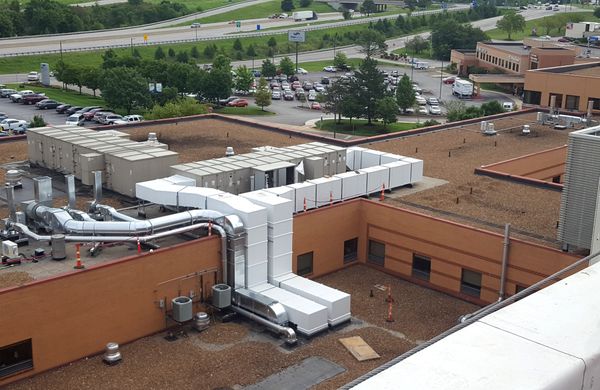 Often, it is necessary to route air from HVAC systems on the roof of a building. This occurs when the ductwork may be too large for the existing ceiling heights or when new HVAC equipment will be added to an existing building. Often, ductwork is routed on the exterior wall of a building so it can be elevated above a usable ceiling height or to provide a unique interior.

The fact is…most people don’t distinguish the differences in outdoor ducting systems and why focusing on different ducting systems can be so important to energy savings. Not actually seeing this energy escaping…is likely why it is given little attention. Evidence from no snow on the top and around the duct proves that this is an issue…and where attention is needed. 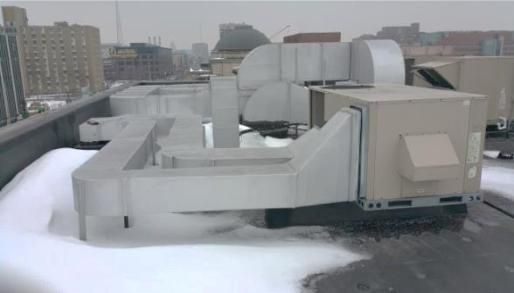 The energy savings leaders at Thermaduct recognized the growing demand from owners for energy efficiency. Managing a building HVAC system’s energy use offers a number of challenges including the HVAC equipment itself, the system control and the “grid” or distribution of that energy. All combined, a building employing outdoor ductwork can save thousands of dollars per year in energy costs.

Using the nation’s electrical energy companies as an example, you could say that the power generation (the source of energy) can be compared to the HVAC equipment, the control and switching of that power likened to the energy management system and the electrical grid likened to the duct system. No different than the electrical grid is to a power company…the ductwork is the “grid” that distributes the energy from your HVAC system throughout your building.

When an energy grid has losses, the required amount of generated energy needed increases. For example, an average home requires 10,900 KWh annually…and the energy grid that supplies power loses 6%. The obvious result is a 6% increase in electrical energy generation capacity needed to provide required power to that home.

When an HVAC system supplies energy in the form of “conditioned air”, these losses in energy from the grid that supplies this energy (the ductwork) can be invisible…yet substantial. 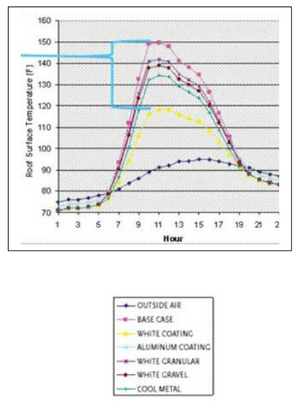 The design of the “energy grid” for your HVAC system has several factors to consider:

Blower horsepower parallels the wattage required to deliver the needed quantity of conditioned air to the appropriate location. When duct leakage occurs, not only have you lost the energy you paid to condition the air being lost in the first place, you increase the power required to deliver the remaining energy to the location where it is needed. Because fan laws demonstrate that a 5% increase in airflow might represent a 10% increase in horsepower, energy from the increased wattage needed to deliver air can be significant.

If you consider the thermal values of the typical duct system, add in energy lost from duct air leakage and the energy from the increase in motor horsepower required to make up for duct losses, the result is up to 40% in energy that is lost from the HVAC system. (source; University of Florida IFAS Extension) Consider if the electrical power companies power distribution grid had losses of 40%, the country would address it as a national crisis.

Thermaduct can reduce the cost of duct loss by over 70%. The savings in most installations is not measured in hundreds of dollars annually… most often it is in thousands of dollars.

Thermaduct starts out as KoolDuct, a high efficiency UL181 Listed foam panel and adds a heavy 1000 micron UV stable, IR reflective factory applied titanium infused vinyl laminate barrier on the external surfaces of the duct panel. All seams are either chemically or thermally welded and are not dependent on tape and adhesives. Thermaduct is backed by a 10 year limited warranty and some of the best support in the industry. The extra measure insures that we can deliver the performance of the product you are paying for now…and into the future.

Some companies have promises, Thermaduct has results. Hundreds of successful installation across the United States prove the benefit of Thermaduct…saving thousands of tons of CO emissions annually.